Ludwig Memorial on the Odeonsplatz in Munich
Ludwig Karl August von Wittelsbach was born August 25, 1786 in the city of Strasbourg, which had been annexed by King Louis XIV of France a century earlier. He was a child of the French Revolution, his personality shaped by its terrors and the subsequent rule (and military campaigns) of Napoleon Bonaparte.

Ludwig's first language was French. His father, Maximilian, served in the French army.  Louis XVI was his godfather. His father was elevated from the position of Duke to that of King of Bavaria by Napoleon Bonaparte. And yet Ludwig was anti‐French and despised Napoleon. He worked conscientiously and indefatigably to advance the cause of German culture and German nationalism.

He was influenced, no doubt, by the fact that he grew to maturity during the 50-year period (1780-1830) known as the era of the German "philosophical revolution," led by Immanuel Kant, Johann Herder, and J.G. Fichte.  Ludwig was especially inspired by Fichte's ardent German nationalism. 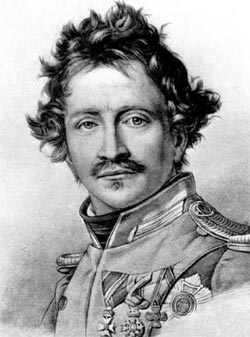