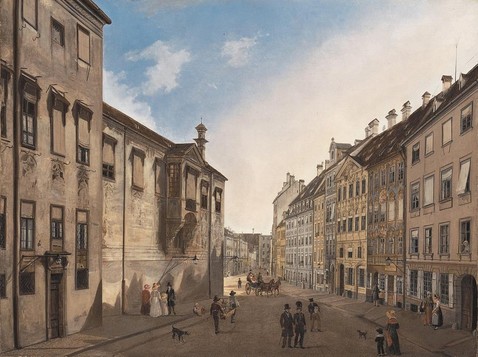 The Residenzstraße towards Max-Joseph-Platz in the Year 1826 - Domenico Quaglio
Domenico Quaglio descended from a Lombard  family that produced several generations of superior artists, architects and theatrical designers who worked throughout Europe. The English Cyclopedia of 1857 praised him as "the German Canaletto."

He was born in Munich on January 1,1786, and from a very early age showed a fondness for architectural painting. With his father as his instructor, he made rapid progress. He diligently devoted his leisure time to still-life drawing and landscape painting, and to etching and engraving.

His brother Angelo advised him to concentrate on architecture of the Middle Ages, and with this in mind he made an architectural tour to Freising and other places to study their interesting monuments of Gothic architecture.

On his return to Munich,  he painted a picture of Regensburg Cathedral, which was purchased by King Maximilian I Joseph, the father of Ludwig I, who exhorted the young artist to confine himself to the new genre which he had so successfully begun.

Following the king's advice, in 1819, Quaglio quit his job as scene-painter at the Munich theatre and applied himself solely to architectural painting. He gradually established a reputation throughout Europe in the genre and his works played a not insignicant role in developing the taste for the architecture of the Middle Ages which later took root in Germany.

Besides their value as portraits of some of the finest productions of German Gothic architecture, his works are marked by striking picturesque effect. In addition to his painting, he executed many etchings and lithographic views, among the latter a series of thirty subjects, entitled "Remarkable German Buildings of the Middle Ages" (Denkwirdige Gebaude des Deutschen Mittelalters.)

Quaglio was among the founders of Germany's first Kunstverein (art association) in 1823 in Munich, a project pushed by then Crown Prince Ludwig to stimulate the market for local artists.

In 1829 he accompanied Henry Gally Knight,  "poet and traveler" and later member of the English Parliament, on a tour to Italy as his architectural draughtsman. Quaglio's illustrations were used in Knight's book, "The Ecclesiastical Architecture of Italy from the Time of Constantine to the Fifteenth Century; Vol. I."

He died of an apoplectic attack on April 9, 1837 at Hohenschwangau, where he was employed in restoring and improving the castle for the then Crown Prince Maximilian. 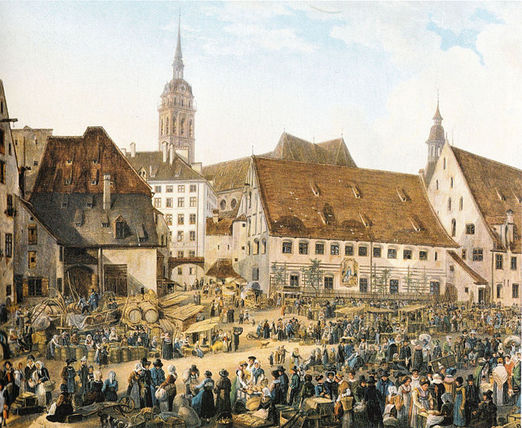 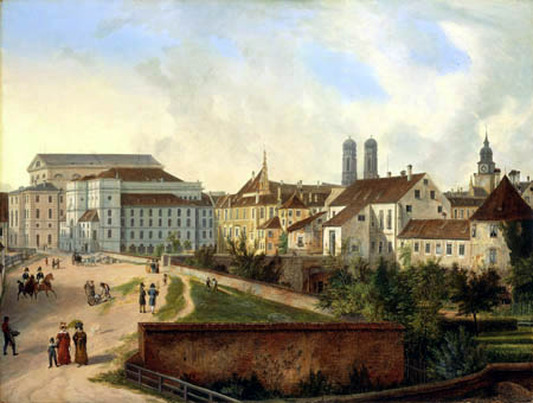 The Hoftheater in Munich (1828) - Domenico Quaglio