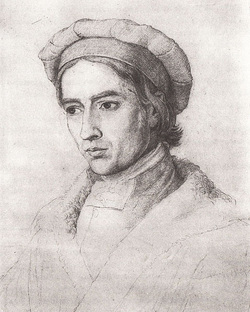 Friedrich Overbeck - Self Portrait (1830)
"In conclusion, you may unhesitatingly adopt it as a general principle, that the fine arts can only be beneficial to man, when, like the wise virgins, they go out to meet the bridegroom in humility and modesty, with their lamps burning, and fed with the faith and the fear of God; and that it is only as such daughters of Heaven that they are worthy of your love."
--- Friedrich Overbeck, Rome, 1840

Johann Friedrich Overbeck was born on July 4, 1789 in the important and prosperous Hanseatic City of Lübeck, where his father was the mayor.  He descended from a long line of Protestant pastors and theologians.

He converted to the Roman Catholic faith in Rome in 1813.

The Danish writer Hans Christian Anderson met Overbeck in Rome on December 20, 1833.  Enamoured with his paintings The Triumph of Religion in the Arts and Christ on the Mount of Olives, Anderson proclaimed Overbeck to be "probably the greatest painter of our day."

Overbeck tried to live his life according to religious ideals, even warning his fellow artists in Rome to beware of the temptations of Bacchus, such that he was sometimes thought to be a nuisance by the less devout. 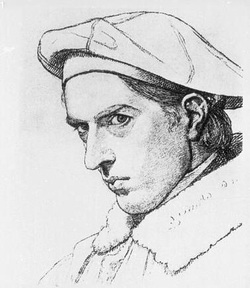