The House of Wittelsbach 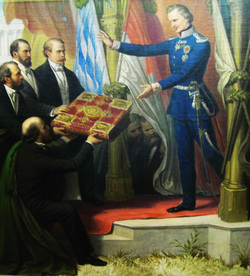 Each day at 11:00 am, noon and 5 pm, crowds gather in the Marienplatz, the square in the center of Munich, to hear the glockenspiel in the tower of the Rathaus or New City Hall, and watch the reenactment of two stories from Bavarian history of the 16th century.

Their necks craned upward, spectators watch a representation of a jousting match at the marriage of the Wittelsbach duke Wilhelm V with Renata of Lorraine, and then a mechanical rendition of the Coopers' Dance. (Coopers were barrel‐makers, a key profession in the bierstadt.)

Because there are so many statues on the building, most probably do not notice the four figures above the archway into the Rathaus courtyard.

Although the House of Wittelsbach ruled Bavaria for more than 700 years, from 1180 to 1918, the longest ruling family in Europe, these four men ruled as kings, rather than as counts or dukes:  Maximilian I Joseph, Ludwig I, Maximilian II and Ludwig II. (Ludwig III, the last Bavarian king, reigned from 1913 to1918, after the construction of the New City Hall.)

“Long before the name of Hohenzollern or even Hapsburg adorn the pages of history, they were prominent as an influential and noble family of Counts, ardent and typical representatives of the strong and handsome race of the Bavarians.” 1