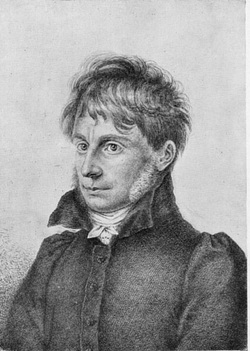 Johann Joseph von Görres
In 1827, the writer and journalist Johann Joseph von Görres was summoned to Munich by King Ludwig and appointed Professor of History at the University of Munich. Previously, Görres had been editor of a nationalist newspaper, the Rheinischer Mercur, which demanded greater self-government in the German states.

In an 1825 issue of Der Katholik, Görres had written an essay dedicated to Ludwig called "Elector Maximilian I to King Ludwig of Bavaria upon His Ascension to the Throne." Through the persona of the young king's Wittelsbach ancestor, who had been a stalwart fighter for Catholicism, Görres encouraged Ludwig to "be a Christian king" and "a pillar of belief."

By 1830, however, Ludwig had become somewhat disenchanted with Görres and his Political Catholicism, a blending of religion and politics. Although he ennobled Görres in 1839 as a sign of support for the Catholic movement, by the time of Görres' death on January 29, 1848, Ludwig had come to regard the ultramontane party as hostile to his reign.