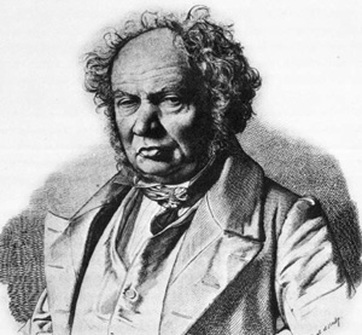 Wagner studied painting in Vienna and Paris, but was forced to return to Würzburg in 1802 when he ran out of money.

In 1803 he won first prize in a competition sponsored by Johann Wolfgang von Goethe and the Weimarer Kunstfreunde (Weimar Art Lovers.)  Goethe also helped Wagner secure an appointment as Professor of Drawing at the University of Würzburg and a two-year sabbatical in Italy.

Wagner ended up staying in Rome for four years instead of two years. While passing through Innsbruck on his way home to Würzburg in 1808, he met Crown Prince Ludwig. Two years later, he left again for Rome, this time in an official capacity, as Ludwig's art agent and adviser.

He was instrumental in Ludwig's purchase of the pedimental sculptures from the Temple of Aphaia.

After the successful purchase of the precious treasure in 1813, Ludwig expressed his joyful thanks in a letter with the characteristically lofty words: "Like Odysseus you have suffered much, Wagner, on my account, and I will not forget it as long as I live."

Ludwig also presented Wagner with a gold watch. Engraved on the back was the letter " L" surrounded by the inscription, slightly altered from Vergil (Aeneid, i. 204), " Post varios casus, post tot discrimina rerum" (" After manifold vicissitudes, after so many perils").

Wagner later served as Ludwig's custodian  at the Villa Malta in Rome.