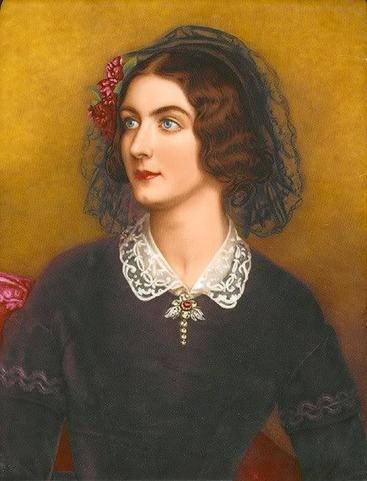 "The exploits of Lola Montez—onstage as a dancer and an actress, in politics as a power behind thrones, and in bedrooms around the world—made her one of the best-known women of the Victorian era."

Eliza Gilbert was born in Ireland, either in Limerick on June 23, 1818 or in Grange, County Sligo on February 17, 1821. In 1823 the Gilberts moved to India, where her father died of cholera and her mother subsequently remarried.

At the age of five, she was sent back to England to live with relatives and eventually attend boarding school. She eloped at 16 with an English lieutenant and moved with him to India. They separated in Calcutta five years later and she again returned to England where she became a dancer under the stage name of Lola Montez, "Spanish dancer."

Recognized at a performance in London, she fled to Paris where she had numerous affairs, including a relationship with the pianist Franz Liszt.

When the great love of her life, Alexandre Henri Dujarier, co-editor and literary critic of La Presse, was killed in a duel in 1845, she left Paris.

She arrived in Munich on October 7,1846, where she applied for permission to perform at the Königliche Hof-und-National Theater, which was refused because the theater director was aware of her reputation.