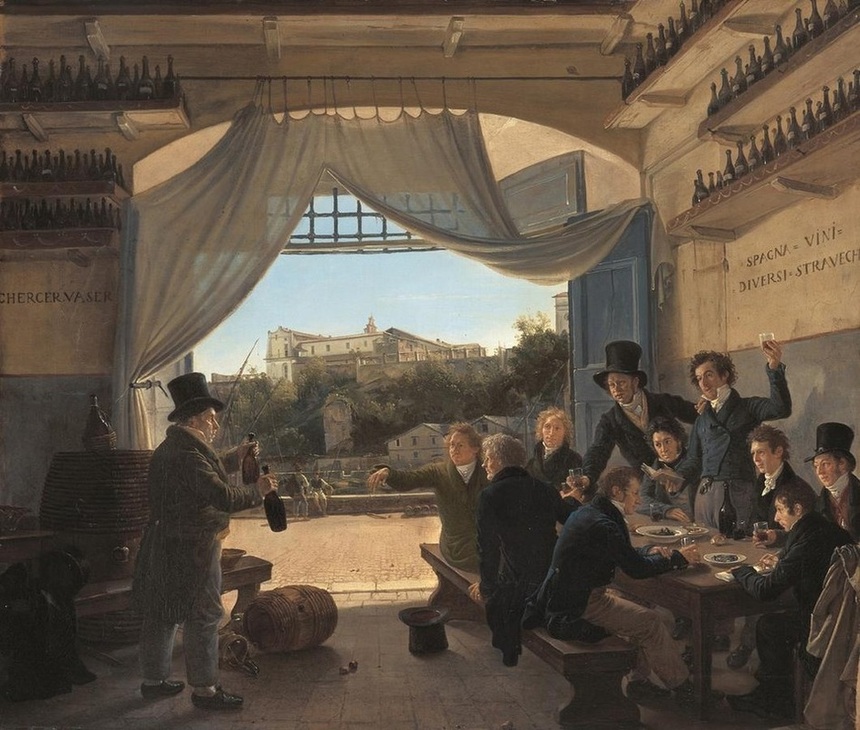 Inspired by Winckelmann's writings, young German artists of the last quarter of the 18th century dreamed of going to Rome to experience firsthand the lands that were the fount of European civilization. Among the most notable of those arriving at that time were Friedrich Müller, Johann Christian Reinhart, Asmus Jakob Carstens and Joseph Anton Koch, all of whom died in Rome, as well as the most famous female painter of the day, Angelika Kauffman.  (Kauffman is sometimes spelled with two "n"s, but she prefered only one and that is the way she signed her name.)

Johann Wolfgang von Goethe wrote of his experiences in "Italian Journey" (Italienische Reise), a report on his travels to Italy from 1786–1787, published in 1816.

The area around the Spanish Steps was the traditional Foreign Quarter. Some 1,500 German artists were registered in Rome around 1800 and this colony of artists from north of the Alps began to be called the Römische Künstlerrepublik (Roman Artist Republic).

The social gathering spot and watering hole for these artists in the Eternal City was the Caffé Greco on via Condotti. The coffeehouses provided a link to the German homeland, a place to talk art and politics, and also served as exhibition and sales rooms. The Danish writer Hans Christian Anderson wrote two novels in an apartment above the café.

"The daily life of an artist in Rome, particularly at the commencement of his career, is hardly worth recording; it is one of toil and perpetual anxiety, where the work of today must provide for the wants of the morrow, and, laboring incessantly for daily support, he has but little time to devote to pleasure; yet, however limited his means, he can find that society most congenial to his tastes and feelings at some of the restaurants of Rome, particularly at the Caffé Greco. Here, day after day and year after year, he meets his brother-artists and persons of culture and refinement. This noted place has been mentioned in so many books of travel, letters, and journals, that its existence is known over all Europe and America. It is and has been for a century the resort of most foreign artists and literary men visiting or residing in Rome, and, if it could record the sayings and doings heard and interpreted within its walls, no book of modern times would be more interesting to the artist, the amateur, or man of letters."
Gatherings from an Artist's Portfolio - James Edward Freeman - 1877 - Page 10

On October 15, 1817, Ludwig departed on a trip to Italy. In  Rome, he met and embraced the German painters of the Nazarene movement, although they had been criticized by his idol, Johann Wolfgang von Goethe. He became a habitué of the Caffé Greco and had his own table in a corner, just as Goethe had.

A former monastery, the nearby Villa Malta, so called because it had been owned by the Order of Malta, served as living quarters for many foreign artists.  Ludwig I bought the Villa Malta in 1827. In 1829 Ludwig commissioned Johann Christian Reinhart to paint the view of Rome to the north, the south, the east and the west of the royal villa, high up on the Pincio. The paintings, roughly 67 by 106 inches each, are exhibited in a special room in the Neue Pinakothek. 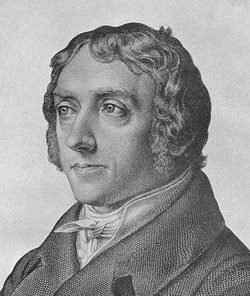 In May 1816, Bartholdy commissioned the Nazarenes to decorate the sitting room of his apartment in the Palazzo Zuccari near the Spanish Steps. Their task was to create a fresco cycle on the theme of Joseph in Egypt.

Another friend of the Nazarenes was German diplomat and scholar Christian Charles Josias, Baron von Bunsen. Together with his wife, the Englishwoman Francis Waddington, Bunsen twice in 1918 hosted parties in honor of Crown Prince Ludwig  at their Palazzo Caffarelli on the Capitoline Hill.