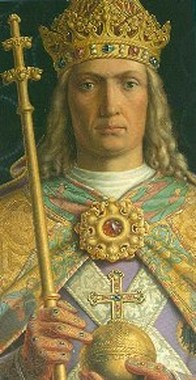 Ludwig IV of Bavaria, also known as Ludwig the Bavarian, was born in either 1281 or 1282 in Munich.

He became Duke of Bavaria in 1294 (yes … at the age of 12!) and was elected German king in 1314. Before he could rule, however, he first had to defeat his rival for the position, Frederick the Handsome, Friedrich der Schöne, a Hapsburg, establishing a pattern of conflict between the two powerful German ruling families.

On September 28, 1322, the Bavarians achieved what has been called the most glorious victory in its history at Mühldorf on the River Inn in a clash between the entire chivalry of Austria and Bavaria, some 50,000 horsemen. The Austrians lost 20,000 warriors and Frederick himself was captured and taken to Ludwig, who had been his friend and companion in their youth.

The two agreed to rule in tandem. “Both conjointly bear the title of Roman-German Emperor, call and regard themselves as brothers, and in their dispatches and other documents their signatures and seals should be affixed alternately.”

However, Frederick withdrew from Bavaria to be with his wife, who it was said had gone blind from crying during his captivity. He died near Vienna in 1330.

Ludwig the Bavarian deposed Pope John XXII in 1324 following a protracted dispute over imperial rights in Italy, appointed an anti-pope, and was crowned as Holy Roman Emperor in 1328.

Ludwig the Bavarian raised Munich to the status of imperial residence, abolished serfdom of the peasantry, and augmented the privileges and status of the towns. He encouraged the development of the arts, especially painting, sculpture and architecture.

He died suddenly in 1347 while hunting, perhaps from apoplexy, or stroke or perhaps poisoned. His tomb is located in the Frauenkirche, the Church of our Lady, whose twin towers are the symbol of Munich.

Ludwig the Bavarian reigned for 45 years and left behind six sons, who against his advice, split up their inherited territory, which resulted in years of constant family infighting and intrigue, with numerous divisions and reunions of their dukedom.