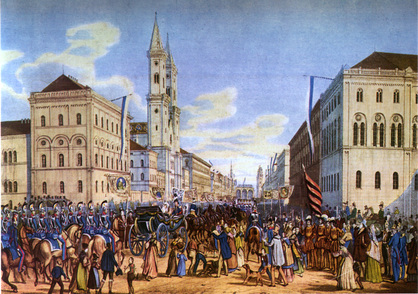 Ludwigstraße 1842: The Arrival of Princess Marie of Prussia.
Ludwigstrasse, Munich's grandest boulevard, runs 1.2 kilometers from the Odeonsplatz in the south to the Siegestor in the north.  The southern portion was laid out by Leo von Klenze in Renaissance style, beginning in 1816, while the northern portion was designed by his rival, Friedrich von Gärtner, influenced by Italian Romananesque.

No other city at the time could boast such a major triumphal street, according to Professor Kathleen Curran, specialist in architectural history at Trinity College, Hartford, CT.

The Via Triumphalis of Ludwig I (Munich Found Magazine)