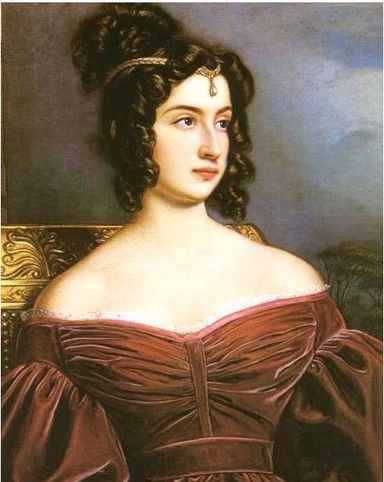 Portrait of Marianna Florenzi by Joseph Stieler (1831)
Marianna Bacinetti was born in 1802 in Ravenna. She was the daughter of Count Pietro Bacinetti, scion of a old and rich patrician family, and the Countess Laura Rossi.

At the age of seven, Marianna began her studies in Faenza at the Colegio de Santachiara, under a noted philosopher, Professor Torrigiani. She also dedicated herself to music and painting, especially landscapes and flowers.

She was one of the first female students in the early 19th century to study Natural Sciences at the University of Perugia.

She was considered exceptionally beautiful physically, but also of a gentle and modest personality. At the age of 15, she left school because her parents had arranged for her to marry the much older Marquis Ettore Florenzi of Perugia, three times her age and described as being "piccolo piccolo, brutto, vecchio" (little little, ugly, old.)

In 1821, at the age of 18, Marianna met Crown Prince Ludwig, then 34, during the Carnival in Rome. They immediately began an intense relationship that lasted until his death in 1868.  Some sources state that they were lovers.  Others claim that it was a plutonic relationship on a high intellectual level.

Perhaps it is merely coincidental, but on October 31, 1821, almost exactly nine months after their first meeting during the Rome Carnival, Marianna gave birth to a son, Marianna Ludovico Florenzi, in Perugia. The infant was carried to his baptism by then Crown Prince Ludwig.

In 1827, when he reached the age of six, Ludovico was sent to Munich to be educated in a college under the protection of King Ludwig and he remained there until 1834, shortly after Marquis Florenzi’s death.

It is said that Ludwig wrote Marianna more than 3,000 letters during his lifetime and she wrote more than 2,000 to him. 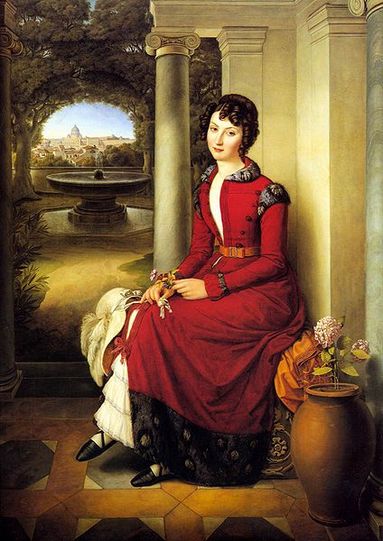 Marianna Florenzi in Rome by Heinrich Maria von Hess (1824)
After the death of Marquis Florenzi, Marianna married Evelyn Waddington, an Englishman who had moved to Perugia, and devoted herself to the study of philosophy, writing and translating.

Under the name Marianna Florenzi-Waddington, she played an important role in spreading the reputations in Italy of Kant, Spinoza, Schelling and especially Leibniz, whose Monadology she translated.

She was the only woman to have been admitted to the Reale Accademia di Scienze morali et politiche di Napoli.  She corresponded with and was held in great esteem by the most celebrated philosophers of the day – Rosmini, Gioberti, Mamiani, Firentino, Babinet, Cousin, Bunsen.  She was at the center of what has been described as "a dense net of cultural connections."

She was at first a disciple of Friedrich Schelling, whom  she had met at the Royal Court in Munich. She was the first in Italy to gather the vast and free thoughts of Schelling (1) and translated into Italian his works On Bruno and Lectures on the Philosophy of Religion.

In her later works, however, she adopted the fundamental ideas and the terminology of G.W.F.Hegel. She held salons in her home where the ideas of Hegel were discussed and debated. She corresponded with Bertrando Spaventa, called "the progenitor of Italian neo- Hegelianism."

In 1842, she traveled to Paris where she met the French philosopher Victor Cousin, who is said to have coined the phrase "art for art's sake" and  played an important role in introducing German philosophical thought to France.

She opened Della Immortalita Dell’ Anima Umana, a treatise on the immortality of the soul, with a quotation from Hegel.  This work examines the views of a number of German philosophers, including Ludwig Feuerbach and  Ludwig Büchner, discussing not only the immortality of the soul but also questions including the nature of moral consciousness and personal identity, and noting the views not just of the Christian religion but also of sources such as the Bhagavad Gita. The work finishes with a brief appendix discussing Terenzio Mamiani’s thoughts on the progress of the universe. 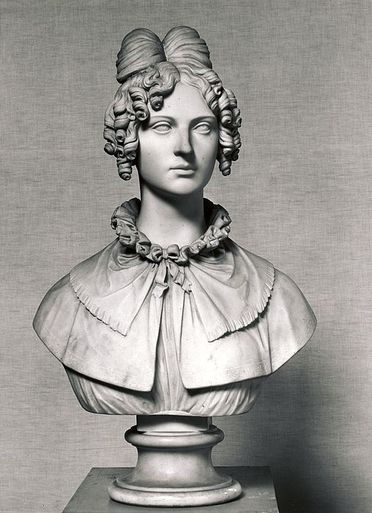