Maximilian I ~ Duke and Elector of Bavaria

Statue of Maximilian I, Duke and Elector of Bavaria by Bertel Thorvaldsen
The Thirty Years War (1618 to 1648) was the 17th century equivalent of World War I and II, a bloody conflict fought primarily in what is now Germany.

Munich suffered terribly, as did all of Germany. The Swedish King Gustavus Adolphus swept through Bavaria and took possession of Munich. After numerous horrific battles he was defeated, but Bavaria was left with half of its population decimated, not only by war, but also by sickness and famine. Entire villages were depopulated, their streets deserted. The land was left uncultivated and incidents of cannibalism were reported.

Maximilian I reigned during this unhappy period.

Maximilian I has been called the greatest of the Wittelsbach Electors, and he was the first to attain that rank in 1623.

Electors were members of the electoral college of the Holy Roman Empire, and their function was to elect the Emperor. The position of Elector (Kurfürst in German), therefore, was very prestigious. 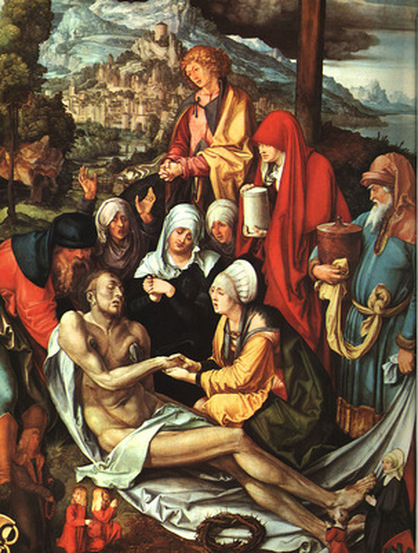 Lamentation over the Dead Christ (1500) by Albrecht Dürer
Art Collector

Maximilian I has been called the most passionate collector of his generation. He was especially enamoured by the works of Albrecht Dürer, who lived in the Bavarian city of Nuremburg and is regarded as the greatest artrist of the Northern Renaissance. His first acquisition was Albrecht Dürer's Lamentation over the Dead Christ (1500), which is now in the Alte Pinakothek museum.  In 1627 he purchased The Four Apostles from the Town Hall of Nuremberg.

Maximilian I added the works of Peter Paul Rubens to the Wittelsbach art collection, so today the Alte Pinakothek has probably the world's finest Rubens collection.