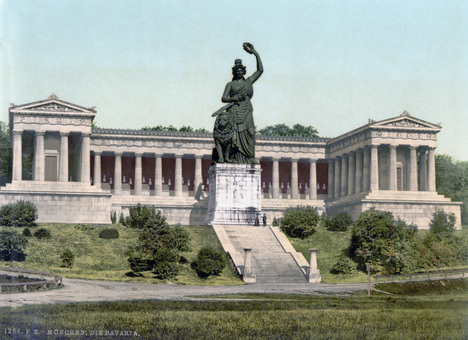 As part of his visionary plan to promote German nationalism, Ludwig planned a Ruhmeshalle (Hall for Fame) on the hillside above the Theresienwiese, the site of his 1810 wedding.

In front of the building stands a statue of Bavaria with the Bavarian lion. 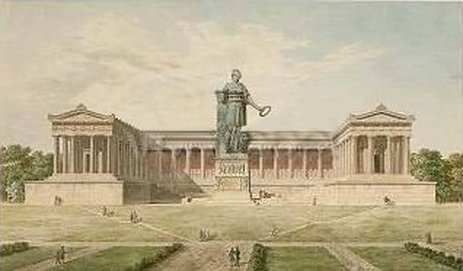 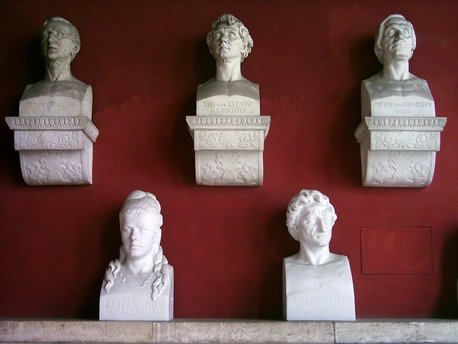 The Bavaria statue was designed by the sculptor Ludwig Schwanthaler and cast at the Munich foundry of J.B. Stiglmair between 1844 and 1850.

It stands 18.52 meters (60 ft 9 in) high and weighs about 96.2 tons.  It is the first colossal statue since Classical Antiquity to consist entirely of cast bronze. Tourists traveled from around the world to watch the progress of the casting.

"Almost one of the last occasions in which King Ludwig appeared in public, was the October Fest in 1851, during which the statue of the Bavaria was uncovered. The king, standing on a large platform in the Theresien Wiese, received the addresses from the  various trades, whose companies came in procession to do him honour. A platform near his Majesty was covered with agricultural produce, for which prizes were given — King Ludwig himself handing the medals, and speaking with his usual emphasis and bonhommie, even to the lowliest peasant there. Then there was a solemn  interval of silence. All faces were turned towards a dark mass of boards in the  centre of the plain, beneath which the famed figure of the Protectress of  Bavaria, Schwanthaler's last work, was concealed from public view. The military  band struck up a slow and solemn  march; the framework began to move, impelled  by some unseen mechanical power. One by one the boards were raised and allowed to separate. The massive braids of the Bavaria's hair were partially disclosed. Murmurs of delight ran through the crowd. Next was seen the calm brow of the colossal face. Expectation
produced a nervous silence—the air was still, not a voice above a whisper was heard; gradually that grandly beautiful countenance, so full of sweetness and symmetry, yet conveying the idea of a gentle wisdom more than human, yet more feminine than commanding, came into view. One long rending cry of delight and triumph was heard. The music quickened in measure—the planks noiselessly fell to the ground, and the whole figure, with her matchless arms, holding a wreath, the reward of genius, extended, was uncovered. It was a proud moment for Munich."
--- Titan by James Hogg (1858)