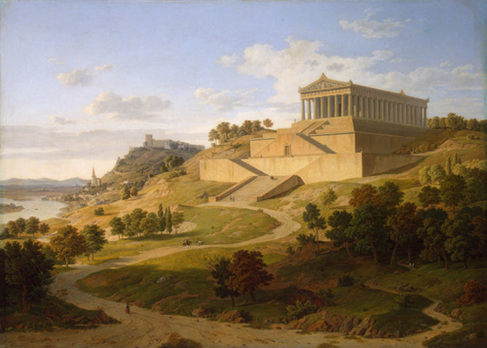 View of the Walhalla near Regensburg (1836) - Leo von Klenze
"As these stones join together, may all Germans strongly united." („Mögen, so wie diese Steine zusammenhängen, alle Deutschen kräftig zusammenhalten!" )
-- King Ludwig at the Walhalla groundbreaking ceremony

Ludwig first conceived the idea for a temple honoring German heroes in 1806. The purpose of such a Teutonic Pantheon was to remind the German-speaking peoples of their common heritage.

Ludwig commissioned several sculptors to create busts of those he had chosen to be honored.  Among the first to be completed was that of Nicolaus Copernicus by Johann Gottfried Shadow in 1807.

The name Walhalla was suggested by the Swiss historian Johannes von Müller, who corresponded with Ludwig, making suggestions as to who should be included.

Ludwig's criteria for inclusion on the list of heroes was based on the individual's contribution to German culture and was egalitarian.

In 1814, after Napoleon's defeat at the Battle of Leipzig a year earlier, Ludwig announced a prize competition for the construction of Walhalla and other buildings in Munich.  Fifty-one architects entered the competion.  No winner was announced but in 1819, Ludwig directed Klenze to begin designing the project. The site chosen was on a hill overlooking the Danube east of Regensburg. The foundation stone was dedicated on October 18, 1830 and construction was completed in 1842. 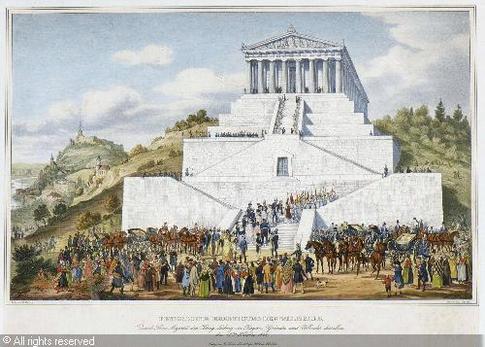 The Opening of Walhalla (1842)
A book was published in 1831 detailing Ludwig's plan.  The lengthy title was Walhalla, oder Biographien der berühmtesten Teutschen aus alien Jahrhunderten--nach dem Plane wie die Namen und Bildnisse der ruhmwürdigsten Germanen in der, von Seiner Majestat dem Könige Ludwig von Bayern, zu erbauenden Walhalla, bet Donaustauf, umveit Regensburg, prangen werden (Walhalla; or Lives of the most celebrated Germans of all Ages, after the Plan according to which the Names and Images of the most distinguished Germans are to appear in the Walhalla about to be built by his Majesty King Lewis of Bavaria, at Donaustauf, near Ratisbon.)

Ludwig Statue at the Walhalla Monument
At the opening, the temple displayed 64 plaques and 96 busts.  Today there are 65 plaques and 130 busts.

Interior of the Walhalla