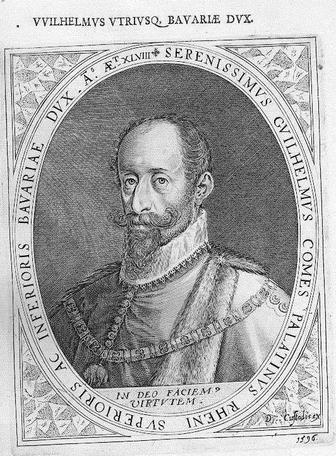 Wilhelm V, called the Pious, received a Jesuit education and attended mass several times a day when he could.

It was during his reign that St Michael's Church (Michaelskirche) was built between 1583 and 1597 as a spiritual center for the Counter-Reformation.

St Michael's was modeled after The Church of the Gesù in Rome, the mother church of the Society of Jesus, the Roman Catholic religious order also known as the Jesuits.

St Michael's is the largest Renaissance church north of the Alps.  Its barrel-vaulted roof is the second largest in the world after St Peter's in Rome, with a span of more than 20 meters.

The façade is impressive with statues not only of St Michael fighting the devil, but also Wilhelm V and his Wittelsbach ancestors.

The celebration of Wilhelm's marriage to Renata of Lorraine is celebrated every day in Munich during the performances of the glockenspiel in the Rathaus (City Hall).

Wilhelm abdicated in favor of his son, Maximilian I, and retired to a monastery.

Wilhelm V., Duke of Bavaria (1579 – 1597), had a thirsty and demanding royal household, which was dissatisfied with the beer brewed in Munich.  As a result, beer had to be imported to Munich from the city of Einbeck in Lower Saxony. Wilhelm ordered his royal court to come up with a way to reconcile cost and pleasure. On September 27, 1589, the chamberlains and council members, C. Strabl, A. Amasmeyr, S. Prew and G. Griesmair, approached him with an idea: why not build their own brewery? Wilhelm welcomed the plan with open arms. As a matter of fact, that same day, he
recruited the master brewer of the Geisenfeld Monastery, Heimeran Pongraz, to be the planner, developer and the first “brown” Hofbräuhaus’ master brewer, which went into operation at the “Alter Hof” ( Old Court ) in 1592. It was called the “brown” Hofbräuhaus as only brown ale was brewed there.

(From the Official Hofbräuhaus Website, which outlines the brewery's history)

It was during the reign of King Ludwig I that the Hofbräuhaus was first opened to the general public.