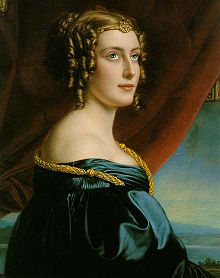 Jane Digby was born in Dorset, England, in 1807. Her father was an Admiral who fought with Admiral Nelson at the Battle of Trafalgar and made his fortune by capturing a Spanish treasure ship.

Lady Jane was already notorious throughout Europe when she arrived in Munich in 1831. She had left her first husband, the Earl of Ellenborough, later Governor of India, to have an affair with the handsome Austrian statesman Prince Felix of Schwarzenberg, with whom she had two children before moving to Munich.

She shared Ludwig's interest in archeology and the classics and they wrote letters back and forth, sometimes two and three a day, even when they knew they would see each other later.

After leaving Munich, Lady Jane had affairs with a Greek count, an Albanian general, and Ludwig's son Otto, King of Greece. She finally settled in Syria as the wife of a Arab Sheikh Medjuel el Mezrab, 20 years her junior, and died in Damascus.

Lady Jane's great-great-niece was Pamela Churchill Harriman, Democratic Party activist and patron of Bill Clinton, who appointed her ambassador to France in 1993. 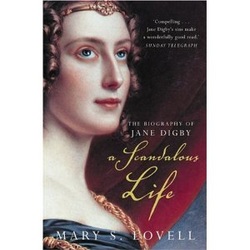 A Scandalous Life: The Biography of Jane Digby by Mary S. Lovell