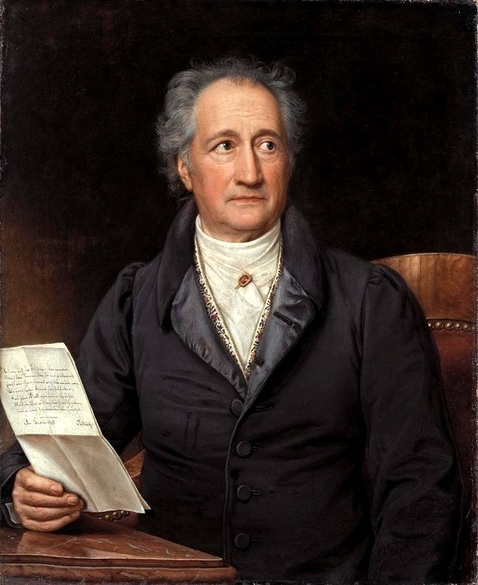 Johann Wolfgang von Goethe by Joseph Stieler (1828)
Ludwig wrote at least three known plays, composed poetry "as if he were a conveyor belt," penned thousands upon thousands of letters and throughout his life kept a detailed diary.

Described as "intellectually gifted" as a teenager, Ludwig attended university at Landshut and Göttingen. He was a diligent student. In addition to national law and history, he made a particular study of modern languages, according to Hans Reidelbach in his biography, King Ludwig I of Bavaria and his Artistic Creations, Depicted in Celebration of his One Hundredth Birthday. (Munich 1888, p.17):

Ludwig translated German “plays into French, French comedies into Spanish, and moreover [did] language exercises in Russian, English and Italian. However, the classical languages of antiquity, Latin and Greek, took second place to this industrious and successful study of the modern languages, and he acquired these later on his own initiative and with astonishing perseverance during his time as Crown Prince. He also practised music and drawing, and by no means neglected his military training. (…) And so Ludwig, the Elector’s heir, received a careful, scientific education of an extent and variety which no other Bavarian monarch had yet enjoyed.“

Ludwig commissioned Joseph Stieler to paint the portrait of his hero Johann Wolfgang von Goethe, one that is probably the most famous and reproduced portrait of the German polymath. (Ludwig also contributed the bronze for the famous statue of Goethe and Schiller in Weimar.)

Stieler portrayed Goethe holding in his hand a piece of paper with the last lines of a poem by Ludwig, whose signature can be seen at the end of the lines.

Ludwig used 28 of his couplets as inscriptions on Carl Rottmann's Italian cycle in the Hofgarten.