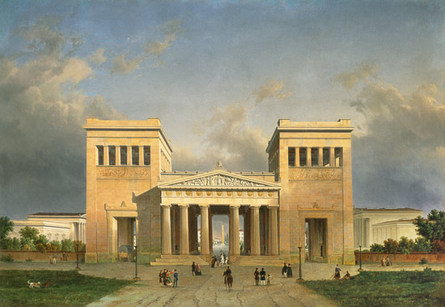 This temple entrance to the Königsplatz is modeled after the Propyläen on the Acropolis in Athens. Between two mighty towers there is a Doric gable front with six columns.

The Propyläen was designed to serve as a monument to the Greek struggle for freedom and to King Otto of Greece, the second son of Ludwig I. The building also symbolizes the friendship between Greece and Bavaria.

The Propyläen is also the name of a periodical begun in 1798 by Johann Wolfgang von Goethe to stimulate ideas concerning art and aesthetics and to promote classical values in art.

In his Introduction to the The Propyläen, Goethe wrote, "What modern nation does not owe its artistic culture to the Greeks, and, in certain branches, what nation more than the German?"