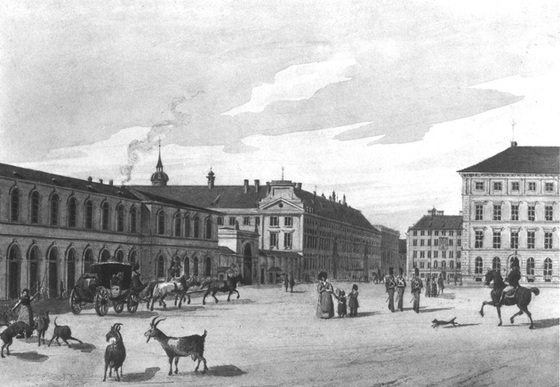 Odeonsplatz (1818)
Although the Odeonsplatz remains, the theater building across from the Residenz which gave the square its name was destroyed during World War II.

Designed by Klenze and paid for by King Ludwig, The Odeon was completed during the years 1826 — 1828 to host public feasts, balls and musical performances.

Lit by a sky-light, the largest room was 50 feet high, 75 feet wide by 130 feet long, described by Edward Wilberforce as being "large enough to hold a thousand people without squeezing."

The ceiling was richly gilded, adorned with paintings by Kaulbach (Apollo and the Muses), Eberle (Apollo with the Shepherds) and Anschütz, (Judgment of Midas).

At one end were marble busts of the composers: Handel, Gluck, Mozart, Beethoven, Haydn, Abt, Vogler, Mehul, Weber, Cimarosa and Winter. During the winter, concerts were held under the direction of the Academy of Music.