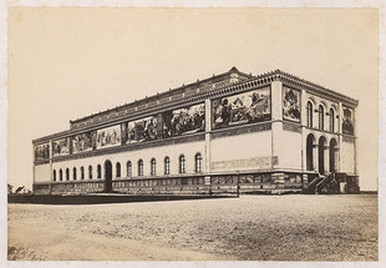 In 1846, the foundation stone was laid  to initiate the construction of the Neue Pinakothek in on October 12, Ludwig's wedding anniversary date. The museum,paid for by Ludwig, was built according to the plans of Friedrich von Gärtner and August von Voit on the site directly opposite the Alte Pinakothek.

The Neue Pinakothek opened its doors to the public on October 25, 1853, as the first museum in the world devoted to a permanent display of paintings by contemporary artists.

Through the years, Ludwig continued to increase the size of the museum's collection.  Amon the works he acquired were Piloty’s "Seni before Wallenstein’s Corpse" (1855) and Böcklin’s "Pan in the Reeds" (1859).

The Neue Pinakothek boasted a collection of 425 paintings by the time of King Ludwig's death in 1868, when royal acquisitions ceased.  The museum's collection today totals some 5,000 works, of which 550 are on display.

Bust of King Ludwig I in the Neue Pinakothek